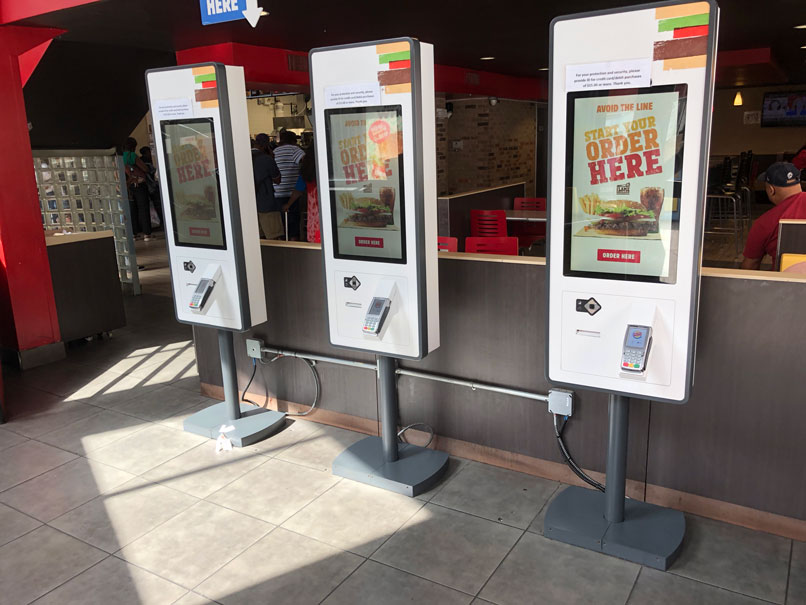 For my observation on a piece of interactive technology in public, I picked the ordering display screens at Burger King. I watched for several minutes as people stood in line and placed their orders during a busy lunch hour.

Coming into the assignment, I had a couple main assumptions about who would be using the kiosks and how the machines would be used. I assumed that when the lines were long for ordering with a person at the register more people would use the ordering machines, which I was right about. This assumption was based on the idea that the only people who would use the machines were those in a rush and they would spend little time using the machines–this, I was VERY wrong about.

I found the majority of the people using the machines took what seemed like an enormous amount of time. Very few people who ordered this way knew exactly how to use the machine, made few customizations to their orders, and were done in less than a minute. A small minority got frustrated and started over, but no one totally gave up on ordering with the machine once they’d started. Most of the people ordering via the kiosks spent more than 2 minutes–one person took close to four minutes! I was amazed at how many screens some of the people accessed to (see if they wanted to) make changes to their orders… I honestly had no idea how customizable Burger King’s offerings were!

Before I left, I asked three different people why they used the machines instead of ordering at the registers. Interestingly enough, all of them started with “I don’t know…” then took a few seconds to give me an answer. One said she liked that she could do it all in one place–specifically order and pay–and not have to wait in line. Another man said that he wanted to make changes to his order and wasn’t exactly sure what he wanted before he stepped up to the machine, but was kind of picky so he knew he would make some changes. And a third lady said she liked to customize her orders a lot and wanted to make sure they got the order right.

Regarding the readings by Norman and Crawford, I can definitely relate to Crawford’s assessment that the word “interactivity” is *way* overused to describe things. I had a really difficult time coming up with an idea for an interactive technology in public to observe, as many of my first inclinations were more in the participation (i.e. obeying crosswalk signals) and communication (i.e. using the credit card machine at the grocery store) categories. While I don’t necessarily agree everything in Crawford’s writings necessarily stands true today, more than 15 years later, I appreciate his clearly defined and elaborated-on criteria for what qualifies–and what doesn’t–as interactive. In the case of the Burger King machines, there was absolutely a back-and-forth when it came to the ordering process. If you can say that placing your order with a cashier involves interaction (which you can), you could absolutely say using the ordering consoles does as well.

I also feel Norman’s writings were relevant to my observations, particularly when it comes the ideas of understanding and discoverability as they relate to the design (and usability) of the consoles themselves. I noticed all types of people using the ordering machines at Burger King–different ages, genders, races, heights, you name it; these devices were meant for everyone willing and interested in using them to place their orders. The design was clear. No one had to get an employee help them. And, probably most importantly, no one gave up on using the device to place their order.

Below is the blog post I wrote on Tuesday night (it’s Wednesday night) after an unsuccessful attempt of performing this weeks’ labs:

As far as the lab for the Digital Input and Output with an Arduino goes, I can’t say I really grasped it all that well. I closely followed the instructions and pictures, which seemed to show how to make the connections.

Despite checking my setup to the setup shown on the site at least 5 times carefully, and copying and pasting the code into the Arduino software, my light patterns were reversed. The yellow was on first, then the red when I pushed the button (the code said the opposite should happen… the red should be on by default and the yellow should come on when the button was pushed.) The only way I could get the red on by default was to switch around the wires leading into the LEDs.

I’ll try again tomorrow, but at this point, I’m feeling very disillusioned. I don’t really get how the Arduino works. I thought I did, but, after this experience, I definitely don’t. Regarding the creative application using the Arduino, I tried playing with the set up taking the switch out of the loop and touching different elements—with several configurations, but nothing gave me results I expected. Hopefully, we’ll get more instruction in class on how everything works.

***Update: Today, Wednesday, I met with my professor regarding some questions I had. While I waited for him, I was fortunate enough to get a really good explanation about how the Arduino works from a fellow first-year ITPer, YongKun. I feel much more confident about the lab, which I learned, as written, was supposed to run as mine did.

Feeling more confident, I took on the task of coming up with a creative application using the Arduino. The idea behind my application was having a transportation vessel—for food, biohazard material, puppies (provided there are air holes)—that would help insure the contents would not escape by showing a red light when the lid is not secure and a green light when it is.

To create a prototype of this application, I coated the rim and the lid of a storage container with conductive material (aluminum foil) and attached those wires to my breadboard, which had connections to my Arduino. The parts of the storage container (the lid and the base) acted as a switch—when apart, they created an open circuit (and the red light was on); when together, they created a closed circuit (and the green light switched on.)