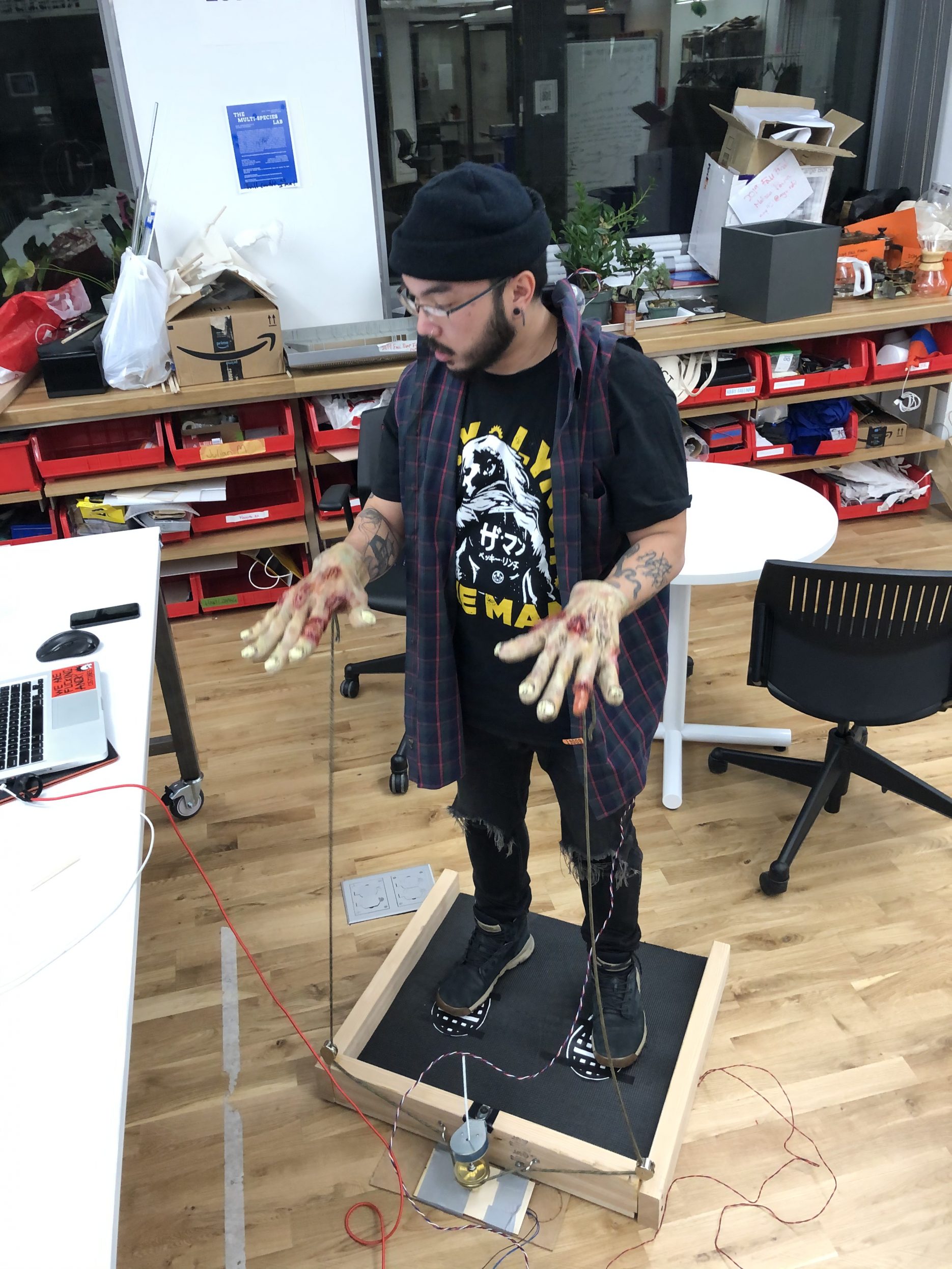 We proudly present Santa’s Zombie Boot Camp, our final project for Physical Computing. Over the past two weeks, we’ve worked hard to get our project working and enhanced to bring you the most enjoyable Zombie Boot Camp experience, yet.

If you’ve been following our progress over the semester, you’ll know that Santa’s Zombie Boot Camp is a continuation of our midterm project, Zombie Boot Camp. For those of you somehow still unfamiliar with our game, Zombie Boot Camp is, at its core, a pacing game, written use p5.js and designed to be played through a web browser. Our zombie must keep pace behind the computer generated player (in this case, Santa)—should he get too close (and eat Santa!) or too far (and potentially fall victim to a monstrous reindeer), it’s game over for our zombie boot camper.

In our newest release, Santa’s Zombie Boot Camp, we’ve not only taken the controller to a whole new level, we’ve put the boot camp in Zombie Boot Camp. The first major way we modified our game was by rethinking our approach to what it meant to play a zombie game. We had commented to one another about how, given the chance to keep working on our midterm project, we would like to add a control that would mimic a zombie lunging for someone. When we found out we would be able to continue working on Zombie Boot Camp, we revisited that idea and how we might implement and expand on it. These brainstorming sessions would lead us to embrace the idea of having the game’s controls be so custom to the game to the point where it would have the player moving like a zombie in order to play the game.

This rethinking would lead to the second major way our game changed. From using a handheld controller to a system of sensors that require movement, Zombie Boot Camp went from a fairly sedentary gameplay to a full-body workout requiring the use of your arms, legs, and core. Here’s how the game controls changed from the handheld controller, which contained a button and potentiometer, for Santa’s Zombie Boot Camp:

• A 2’ x 2’ platform base was constructed to establish a distinct game space.

• FSRs were added to the platform base and placed under a mat for players to march/stomp on in place. For gameplay, the continuous movement of the feet helps increase the player’s score.

• A pulley system connected to a rotary encoder was added to the base, as well. Each corner of the front of the base has a pulley that connects to an end of the string. The users will move their arms up and down, like in classic zombie movie representations, to use this aspect of the game. For gameplay, the continuous movement of the pulley system when the player is within range of Santa’s bag will help the player delivery packages for Santa, thus earning the player more points!

• A larger start button has also been added, off to the side of the platform (in a newly fashioned box housing our wires.)

These new components are all connected to one breadboard using a Arduino Nano IOT 33 microprocessor and connecting to the p5.js sketch holding our game via USB.

We’ve also updated the code as well. First of all, in addition to our start screen, we’ve added a number of instructional screens to help players understand what’s going on with the game. In our previous version, our zombie was following his trainer, keeping pace through a spooky setting. As they traveled from right to left on the screen, the trainer would jump and the player would be required to jump or be penalized.

In our current version, our zombie is following Santa helping him deliver gifts (when he’s in range) while keeping pace traveling through a wintery background. To help our players better understand the sweet spot for pacing, we added a rabid-looking reindeer to make sure players don’t fall too behind. We also changed the direction the players travel across the screen to be a more traditional left to right direction, and removed the obstacles from the route.

In addition to updating to more Christmas-themed graphics, we updated the music using an album of 8-Christmas music. And, in hopes of increasing the enjoyment of more goal-oriented players, we included increased difficulty as the game goes on as well as a scoring system.

Along with all the good information we got from presenting our mid-term project, we were very fortunate to get really positive feedback on, and some great suggestions for, our project from both our paper play testing and our final prototype play testing. If you’re curious to see more about the progress and development of our game over the past eight weeks, here are some links to our previous updates on (Santa’s) Zombie Boot Camp:

Hope you’ve been able to enjoy our game; if not, you can always enjoy our blog posts (though, we promise you, the game was MUCH more fun!)

…and, just in case, here are a few more pictures, if you haven’t gotten your fill: