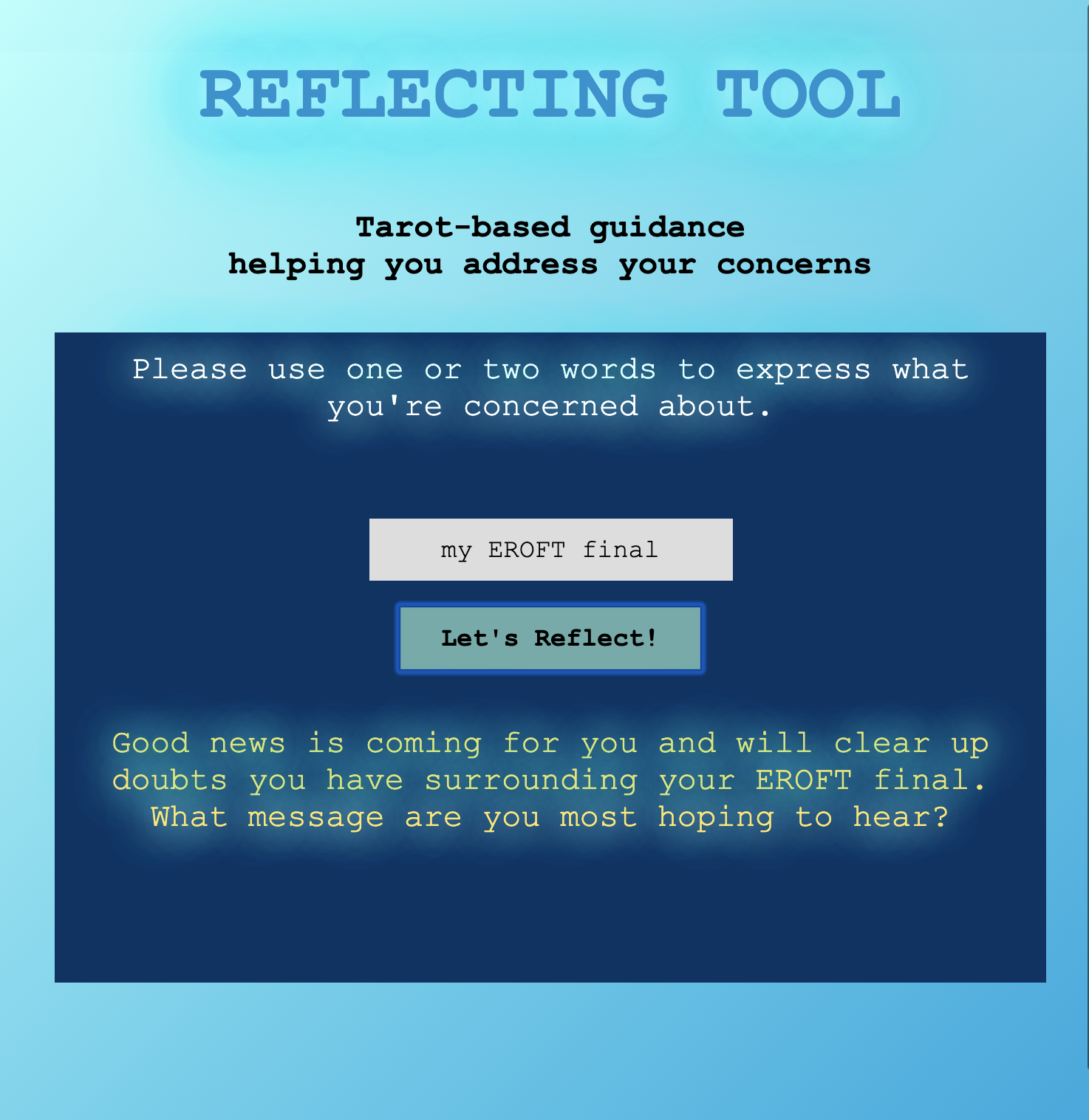 I took Electronica Rituals, Oracles, and Fortune-Telling this semester for a few reasons—the main two were to practice/improve using my coding skills (especially JavaScript) and to learn new ways of thinking that I might be able to take advantage of in working on future projects. This final project incorporates both of these. Check it out:

Having covered such topics as Ifá, astrology, and oracle cards, there was plenty to pick from for this project. Personally, I was drawn to th concept elaborated on in the excerpt we read for class from Italo Calvino’s The Castle of Crossed Destinies. To me, there’s something particularly mystifying and exciting about a deck of 78-cards that could be used to explain ANY circumstance in life. My hope at the start of the assignment was to gain a deeper sense of these cards’ meaning through interacting with them—and I really feel I did get a better understanding of tarot.

Throughout the semester, I’ve been using my meditations to provide predictions and convey messages using different methods. Rather than sending declarative and imperative phrases with information telling the user what’s going on with her life, I wanted to leave her with questions to ask herself regarding her concern.

The idea is that, rather than directly inform a querent of my (or even a 3rd person’s) interpretation of a tarot reading, my Final Meditation would leave the querent asking about, and looking within for, similar (and potentially more detailed and expanded) information (aka “answers”.) Because of this, I’ve named this Final Meditation the “Reflecting Tool” (a play on the phrase reflecting pool.)

If you’re interested in checking out the code for my Reflecting Tool, check it out on the p5.js editor.

For this meditation, I built on a previous project that had a similar setup (see my mediation called “Winds of Change”.) The user would be prompted for a concern and then receive a response below. The appearance is similar; however, I took the time to learn how to make subtle design changes, most notably the glowing effect and the gradient background color.  Because I wanted the vibe of the Reflecting Tool to give off reflecting-pool vibes, I thought the glowing elements and the blue gradient background would add a calming effect to the meditation.

In terms of my work on the code, though, I’m more proud of accomplishing the goal of learning how to change out the possessives to create a more personalized interaction. To do this, I had to split the users’ concerns, map changes of 1st person possessives to 2nd person possessives, and then reassemble the querents’ concerns to appear as though the meditation is speaking directly to the querent. [A special thank you to my boyfriend for taking the extra time to make sure I understood this function.]

What I’m most proud of, though, is the hours (and hours) I spent with the tarot cards and the work I put into creating the data for this project to output. I started by pulling out my Gummy Bear Tarot deck I bought for class and looking through them. After reading through the booklet and feeling and perusing the cards, I then found generic descriptions for each of the cards in the Rider-Waite tarot deck and pulled them into an Excel spreadsheet—specifically, I chose the descriptions for the cards that was listed for when they are interpreted in their upright position. Here’s a copy of my Tarot_Decriptions_(draft) spreadsheet.

I then created a column in my spreadsheet where I could write down several keywords that would relate my impression of the full tarot descriptions. From there, I created 78 individual custom responses, which included interpretations and thought-provoking questions into which querents’ concerns could be incorporated.

In working on this project, I spent a lot of time with tarot and reading the descriptions for all the different cards, working to get a feel for each of them. I really tried getting a sense of what similar traits the cards within each suit shared, which was harder for me to discern than I expected, and was able to more easily recognize a lot of similarities in descriptions among cards of the same rank/number. For example, the Ace cards tended to involve new beginnings, Two cards tended to be about balance, and Five cards focused on struggle and conflict. It’s completely possible that, because there were more cards in a suit to find similarities between, picking out similarities among four cards was easier. (I did some reading online about the different suits and their meanings and there’s ton of that stuff on Google, but I chose to write this based on my impressions before researching tarot more deeply.)

The biggest impression from this project was left on me by how there are so many overlapping similar description traits which all add up to somehow produce a complete deck full of nuances. I’m really appreciative for this insight and the opportunity to work with such a simple, yet robust, tool. I look forward to incorporating tarot (and other concepts learned in this class) in future projects and absolutely plan to turn to Calvino’s storytelling technique the next time I’m stuck on a project’s narrative. 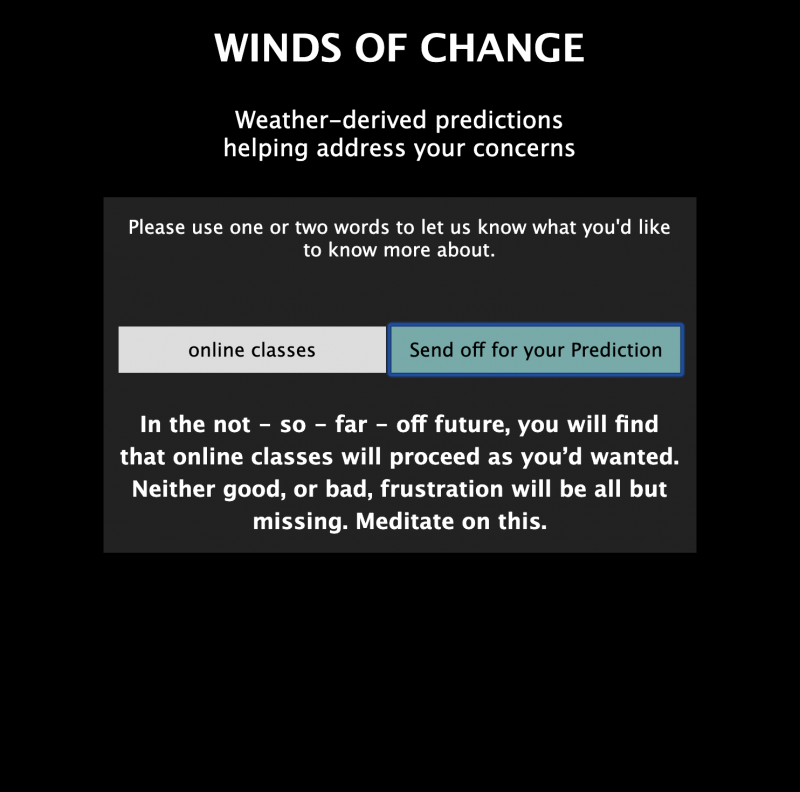 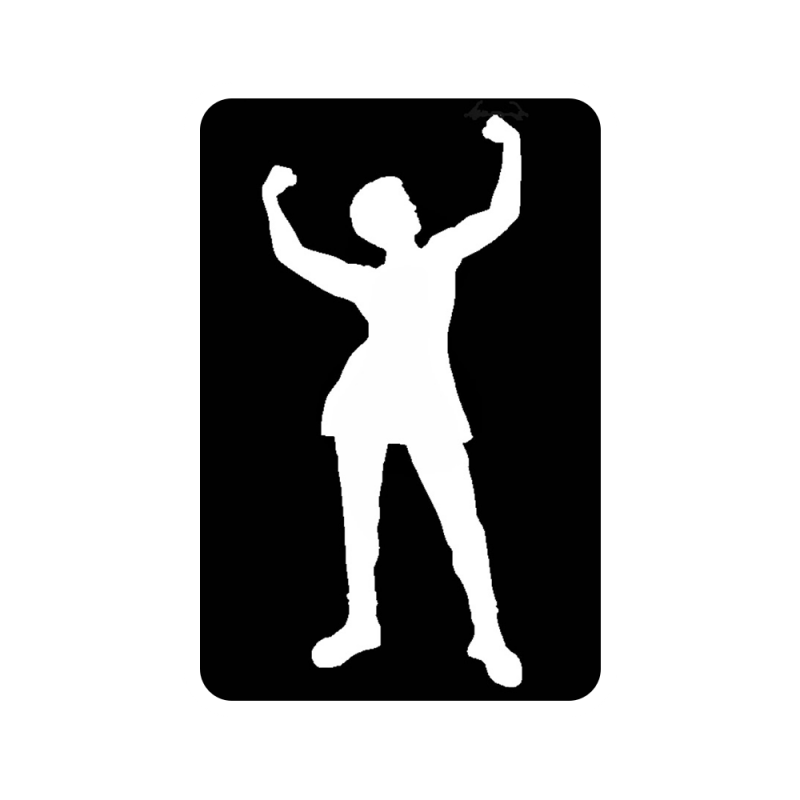 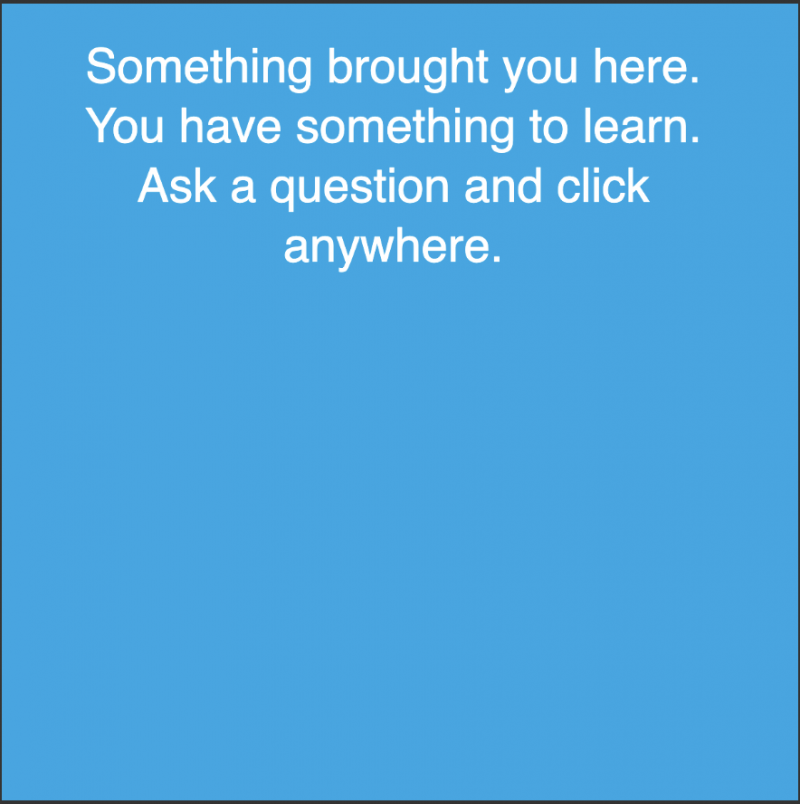