This week, most of the class met for over 4 hours to discuss our Room’s between Friday and Saturday. We were fortunate enough to get our professor, David Rios, to come help us review the puzzles and discuss the flow of the story, the puzzles, and how to interweave the two.

We made a table for each of our three players that included an Introductory section, an Investigative section, and an Escape section, along with explanations and transitions. Here are copies of those:

The three final puzzles will be accessible to all three players, but each player is limited to accessing one puzzle at a time; however, because different players can access the same puzzle at the same time, they will be able to work together to solve the escape phase’s puzzles.

We also made some pretty big decisions regarding the Room as well. We decided that players should be able to help each other when they’re finished with the Investigative phase puzzles and, when they’ve all finished, offering them an opportunity to turn in the professor (which, if yes, locks them into a room they have to escape.

Another thing we decided on was making how (and to whom) they are able to communicate with during the different phases. In the first phase, we’re limiting them just to type with just the GameMaster, which we’ve decided will be presented to them in the form of an overseeing Artificial Intelligence (AI.) The second phase will allow players to have voice interaction with one another and the final escape phase will have them interacting with video and sound.

We also discussed other things like having a type of souvenir for the players once the game is over such as a cool newspaper cover announcing they’ve helped catch a dastardly professor.

We left the meeting on Saturday deciding that each puzzle designer should play test their prototypes with at least 2 to 3 people and come to class with a few lines about the puzzle to lead in as well as a hint or two in case players get stuck.

I had my family and a couple of friends play test my puzzle the Professor’s Seating Chart. The best feedback I got was that there was a typo (which I’ve fixed) and that keeping track of people’s names was tricky. I was even told that one person forgot to include the professor at the table. Here are the reported times it took people to complete: 5, 8, 9, 13, and 15 minutes. (The last three were my parents and step-mom who are all in their 70s.)

I feel like this could be modified to be easier if need-be by only referring to the rep from CogniSense by one name (and not referring to him as Chris Jones or Jones.) I also think adding an oval with numbered places would help make this easier. To make it harder, we could add names of different reps and refer to them by first and last name (like with Chris Jones in the current version.)

For clues, I would say it’s kind of hard to give clues that don’t give a lot away. A suggestion to make it easier without giving too much away would be to send the player a “copy” of the table with numbered seats and a chair labeled “Professor’s Chair”. It doesn’t really give too much away, but helps the player organize. Clues that would help give the player a bigger advantage would be to reveal that the professor isn’t sitting next to Anamnesis or Diary, or, another clue that would tell the player the professor is sitting across from Ephememory. 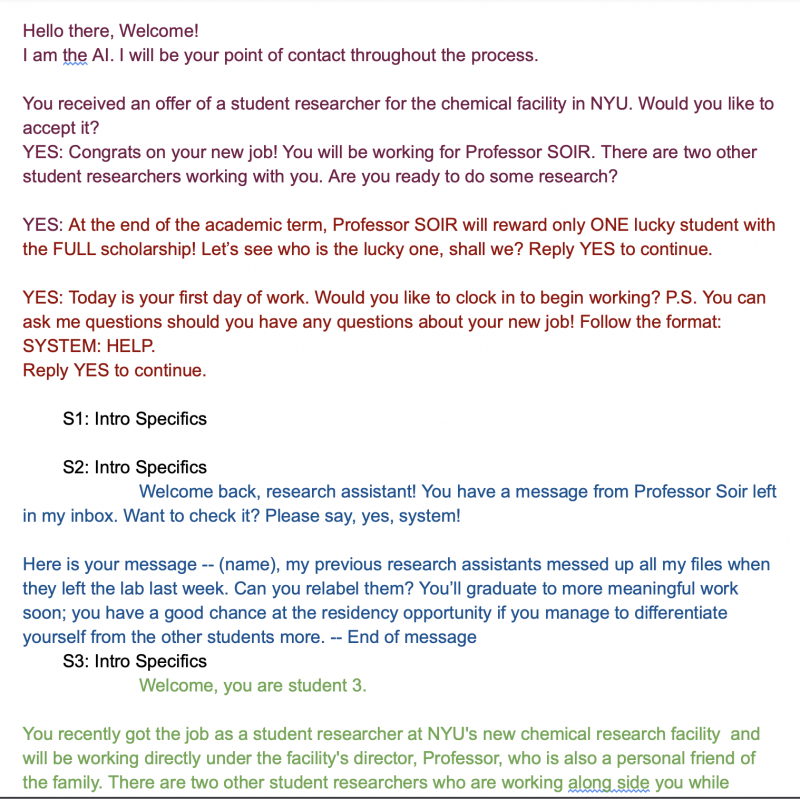